The Passionate & The Fashionable

By Izzy Manzo and Nate Johnston

Jenna Palermo attributes her business, and decision to become an art major, to being raised by “artistic people.” Up until high school her schools lacked art programs, but her mom still made sure she was able to express herself artistically.

“My mom converted an extra room of my house into an art room when I was really young, and let my sister and I explore whatever art we wanted,” she says. “It’s always been a fun and interesting thing for me to do.”

While she started creating art at a young age, Palermo only started selling her prints two years ago.

“[Selling art] kinda just clicked during high school,” she says. “I was like, ‘could I do something with art?’ and everyone was like, ‘yeah, you can try.’ ”

Palermo explored with different mediums, but now she mostly makes marker art and tattoo designs. In the future, she hopes to expand her business by selling clothing with her designs, but it is in an experimental stage as she works out the quality of clothing she would sell.

“I want to try it out first before I even start selling it,” she says.

Palermo does not have a website to sell her art from, and most of her business is currently conducted through social media platforms such as Instagram or Twitter. For her to create a website, she says she would need more traction.

Selling prints on social media is convenient because it is a platform she already uses to promote herself.

“I’m already making the art and I’m already posting it; if someone wants to buy it, all I have to do is edit it,” she says. “Or I can just give them the original.”

However, she says, promoting her art on social media can be a challenge. It is possible to get “lost in the shuffle” on Instagram or Twitter if she makes posts about her art too frequently, she says.

“You have to get people to like what you do and have people support your business, and that’s really hard,” she says, “especially if you’re social media-based because there’s algorithms and stuff.”

Being a college student without another job also proved to be challenging for Palermo. Prints are not expensive for her to make, but sometimes having the funds and supplies needed to make them can be a struggle.

“Sometimes you don’t have any money to go get things done,” she says. “People will be like, ‘can I get three prints?’ and you’re like, ‘yeah sure, but I need to find $10 to get this stuff printed.’ ”

At this point, selling her prints is not enough to fully support her financially. 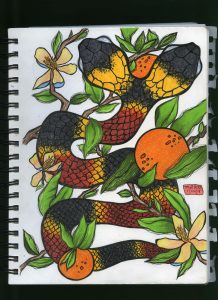 “I’ve been looking for another job because I don’t get enough income for me to make an actual living,” she says.

Palermo describes what she makes from her art as “side money” that she can use to put gas in her car or pay for other minor expenses.

While her prints alone are not enough to support her full-time, Palermo’s love for making art outweighs the money, and it is something that she can continue to see herself doing.

“It’s not the most successful business in the world but it’s something that I love to do,” she says. “If people enjoy my art and I can give it to them, then that’s even better.”

Sidney Jones lives the hectic life of a college athlete.  Having to balance school and sports seems like enough work, but on top of his already busy schedule he runs a local apparel business. He runs his clothing brand, Ca$hout Kings, with the help of his friends and family.

Jones, a senior, and journalism major, started the company in Neff Hall, taking the name from a saying he and his friends would use in their high school weight room. He decided to see if the logo and saying would look good on T-shirts.

He worked with his cousin on the design and logo, then uploaded the draft to Custom Ink.

“We had a final piece and it just worked out perfectly,” he says.

He took the T-shirts to his friends and family to try out and discovered he had something created a clothing brand that had potential.

While Ca$hout Kings is still a hobby for Jones, it is more about getting his brand to grow.

“It’s cool for people to know our brand, and get our brand out there,” says Jones. “We have people wearing it in Georgia, Chicago and New York.”

Even with the business being a part-time effort, he still finds it difficult to manage everything by himself.

With the help of his family and close friends, however, Jones finds it much easier to keep everything running smoothly.

“I have a supporting cast around me,” Jones says. “I keep it family oriented because they know what’s best.”

While most of his sales come from his website cashout-kings.com, he also found a community of buyers on campus who help support local entrepreneurs. Ca$hout Kings found a home within Connecticut’s tight-knit community of up-and-coming clothing brands and local small businesses.

Its website states its mission is to put community and residents first. The website is also home to a blog where Jones includes local restaurants of his liking that he encourages others to visit.

Jones plans to graduate this spring and continue to grow Ca$hout Kings with the help of his friends and family. He participated in a recent fashion show during winter break and will release a new collection of shirts for the spring.