A Different Level of Competition

Intramural sports give students another option to compete

Musson works in conjunction with colleague and fellow graduate assistant Damian Barnes, under advisement from Andrew Marullo, the office’s assistant director. Musson says he helps students get involved with intramural activities on campus. According to Musson, the intramural events share facilities with Southern’s National Collegiate Athletic Association sports, typically later in the evening, after any Division II sports.

Musson worked in similar roles while he studied at UConn and is applying those experiences at Southern to make intramural sports successful. He says the program encourages students to participate, and get some competitive experience which some students may miss out on with the transition from high school to college. 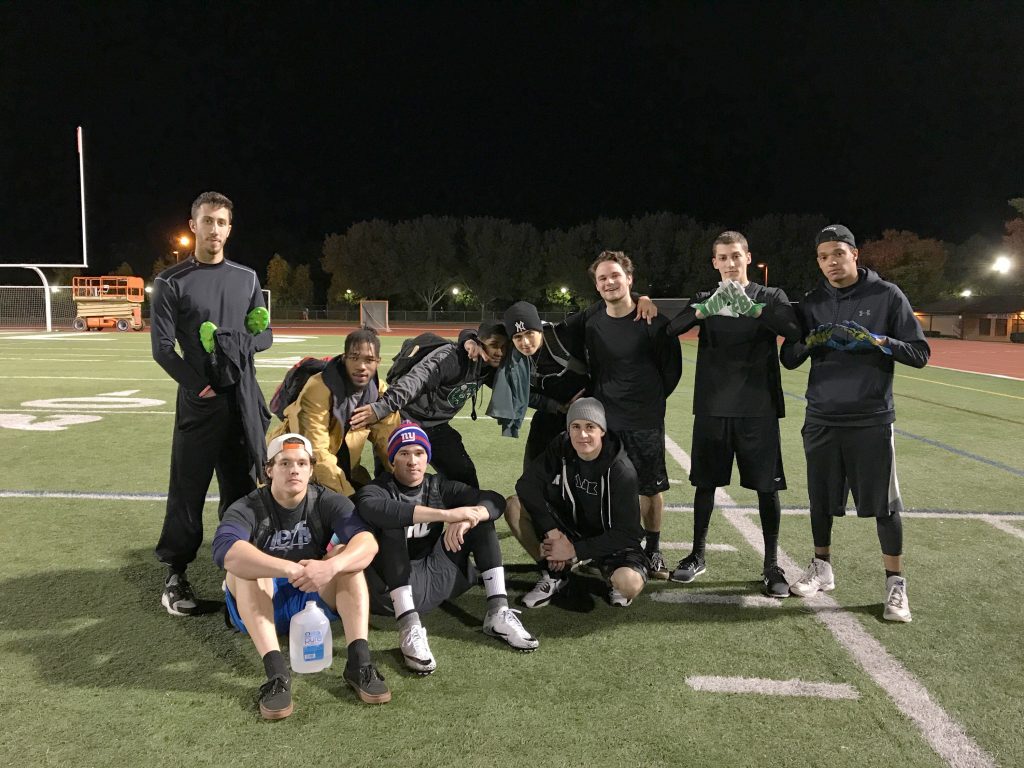 MaryJo Archambault, assistant professor in the department of recreation, tourism and sport management, agrees that intramurals can be more “laid-back.”

“I know from my students who’ve signed up for the intramurals, that it’s a non-threatening atmosphere,” Archambault says.

As an example of how this intensity varies, Musson says the intramural basketball season is very competitive, while dodgeball and indoor soccer have more students just wanting to be involved and have some fun.

“It’s not just about people who go out to win, win, win,” Musson says. “It’s an opportunity to spend time with the people you’re friends with on campus.”

Archambault says it is not always limited to those existing groups of friends, however.

“It’s a great opportunity to bring students together, who might not otherwise get together,” says Archambault.

Southern Senior Kyle Bacharach, who has played intramural flag football, says that he has noticed this advantage.

“I’ve personally had a really positive experience with intramurals,” Bacharach says. “I would say there’s definitely a good mix of people who participate.”

Archambault was responsible for spearheading the introduction of Southern’s newest intramural sport, wheelchair basketball, last semester. She and professor Mike Dodge were able to successfully arrange with Marullo two intramural sessions of the sport in the fall 2017 semester, where Archambault says she saw a good variety of students.

At those two events, Archambault says, “There were students who don’t typically get to play sports at our university that were able to play.”

Students at Southern also have another option, if they are not recruited or do not successfully walk-on to an NCAA program, or do not want to take part in a Division II atmosphere altogether. They may also participate in a club sport. Recently, Southern has seen success in its men’s and women’s rugby clubs but they also have sports such as men’s ice hockey, golf and ultimate Frisbee.

Musson says the campus recreation office is always open to hearing new ideas for club sports, but they require more dedication than intramurals.

According to Musson, club sports have a much bigger time commitment in terms of practices, games or travel.

“There may also be some cost associated with it; ice hockey may require a lot more upfront dues than the step team,” says Musson.

Archambault says this is exactly the reason for intramural sports. “Higher intensity” students will always flock to a club sport, but intramurals retain a light-heartedness that can be comforting.

“Intramurals offer a program where people do not have the same time commitment or may not have the same skill level as a club student-athlete but still want that same experience,” Archambault says. “Some people just do not want to be in that competitive atmosphere.”

He says that little bit of competition is important so that nobody wastes their time, even if they don not play at a NCAA skill level.

Archambault says that the goal is to instate her intramural, wheelchair basketball, as a club sport in the future. For now, she says the intramural arrangement allows students to explore the sport “without the added pressure.”

Musson describes the relationship between athletic staff as generally very good. He says there is a lot of cooperation between campus recreation and the athletic department, especially in terms of coordinating facility times.

At Southern, several sports and activities regularly occur on Jess Dow Field. In Division II, Southern’s football, field hockey, lacrosse and soccer teams all compete on the same turf throughout the year. Some club sports, like men’s and women’s rugby, receive some time there for games as well.

Southern’s intramurals use appropriate facilities for respective sports, so for winter sports like dodge ball or indoor soccer, students utilize the Moore Field House. As is the case during the fall season at Jess Dow Field, intramural student-athletes will have to work around the men’s and women’s basketball schedules as they are in-season from the middle of November until sometime in the early spring, around February or March.

Musson says, “there’s one facility that’s well-lit and accessible and then there’s the one indoor facility,” speaking of both Jess Dow Field and the Moore Field House.

There is also Pelz Gymnasium, which is home to several athletic offices and the women’s volleyball team.

However, Musson says it doesn’t get much use between anyone.

Basketball, dodge ball and softball have all been offered as intramurals, as well as flag football, wheelchair basketball, and indoor soccer. Bacharach says he has observed flag football and basketball to be the most popular intramural activities, with softball following closely behind. All of Southern’s intramurals are laid out on IMLeagues.com, where students can register before or during the season.

By Matthew Gad and August Pelliccio